Greater Springfield is the first master-planned city since Canberra.

This major developmental undertaking has turned South East Queensland’s western corridor into one of the nation’s fastest growing regions.

A comprehensive masterplan, declared the world’s best by the International Real Estate Federation, guides this growth.

Every aspect has been meticulously planned to meet the needs of a thriving community from local jobs to learning opportunities.

At nearby Education City, the University of Southern Queensland’s campus is doubling in size to meet demand, as is Orion Springfield Central.

More than 43,000 people have already made the move to Greater Springfield and they’re on the way to a population of over 100,000 by the end of the decade.

This incredible and innovative community is at the epicentre of one of Australia’s fastest growing regions. As the country’s largest master-planned urban environment, Greater Springfield has become a nation-building blueprint for what a 21st century city should be.

With one job planned for every three residents, they’re building more than just homes, they’re creating an economy based around the sectors that will power Australia’s future: health, education, and innovation. No wonder organisations like the Mater Hospital, University of Southern Queensland, GE and Northrop Grumman call Springfield home.

With a plan to be Australia’s first zero net energy city by 2038, they’re also making it more efficient to live and do business in Springfield by embracing renewable energy, electric vehicles and lower power bills.

As a lifestyle hub, more than 30% of the city is designated as green space, with the stunning Robelle Domain and one of the largest public water parks in the hemisphere at its heart. Our community sporting facilities are among the best in the world, and include Queensland’s #1 ranked public access golf course, and, from next year, the home of the Brisbane Lions Football Club.

To view an interactive map of Greater Springfield, and an overlay of the anticipated infrastructure to be completed between 2020 and 2040 CLICK HERE 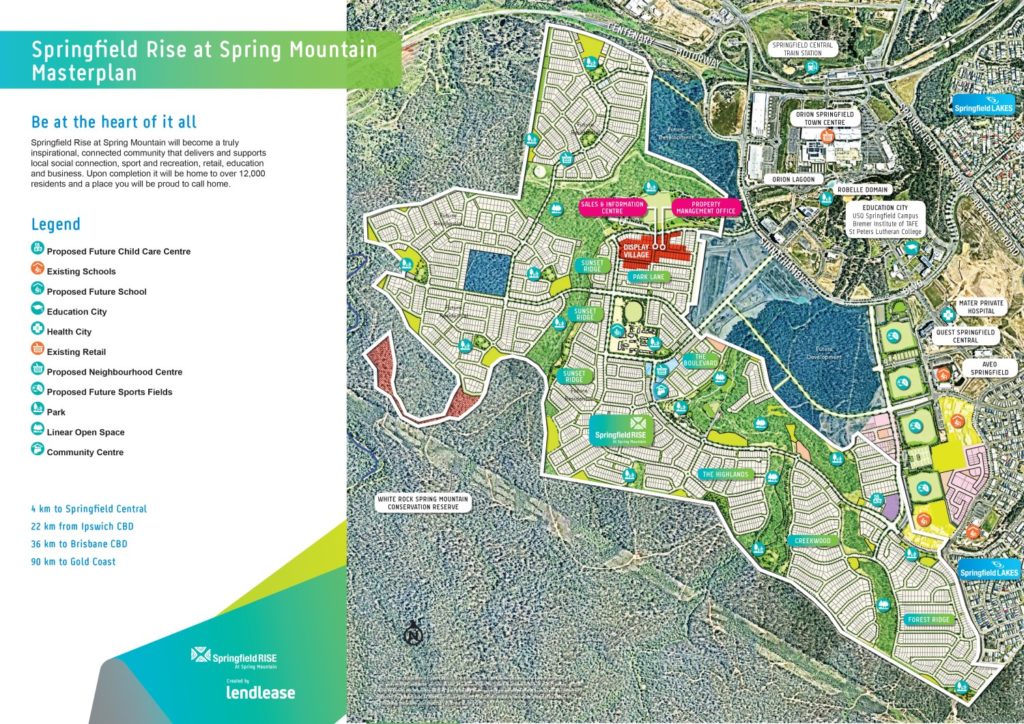 Why Springfield Rise at Spring Mountain?

Designed to offer a connected and vibrant life-style where residents live in a close-knit community.

Where your neighbours are your friends, the kids ride
bikes around the creek, the environment is safe,
the local shops are just a short stroll away, the
school is only a stone’s throw from home and the
commute to work is just a short ride from the
local train station.

Greater Springfield continues to take its place
on both the local and national stages as it expands
as one of the most dynamic urban growth areas
in Queensland. Across the total land area of
2,860 hectares, there are already over 32,000
people living in what is one of the fastest growing
new cities in Australia.
We are well on the way to achieving the Government’s
objective of delivering a residential population of
86,000 and employment for some 52,000 workers
with a CBD land area that is twice the size of
Brisbane’s.
Since inception in 1992, and with its own Act
of Parliament, Greater Springfield has attracted
significant private and public infrastructure including
the AUD $1.2 billion Springfield Rail and transit hub
which opened in 2013. The world award-winning
master plan for this city-to-be revolves around health,
education and information technology and with
$12 billion invested so far it remains steadily on track
to provide at least one job for every three residents.

Springfield forms an area of the Ipswich Local Government Area. Population growth is expected to exceed 220% between 2016 – 2043 A progressive, vibrant and modern new town, that brings back true neighbourhood living.

By its very definition, Providence South Ripley is about nurturing and care. And it is a value held dear to the team building this visionary town.

Committed to recapturing the essence of community, Providence South Ripley is a special place created to respect the beautiful natural environment, the pioneering past, and the people who call it home. It is already shaping up to be a thriving, welcoming, fully-serviced town where you can enjoy the true value of genuine neighbourhood living.

Providence South Ripley is considered by many to be the “Penrith” of Brisbane, and is a true master planned community.

Providence South Ripley estate is 80% plus owner occupied which insures capital growth. Bank valuations are coming in on the dollar which further backs up the quality of this estate.

Infrastructure yet to arrive that will drive capital growth:

“A progressive, vibrant and modern new town, that brings back true neighbourhood living.”